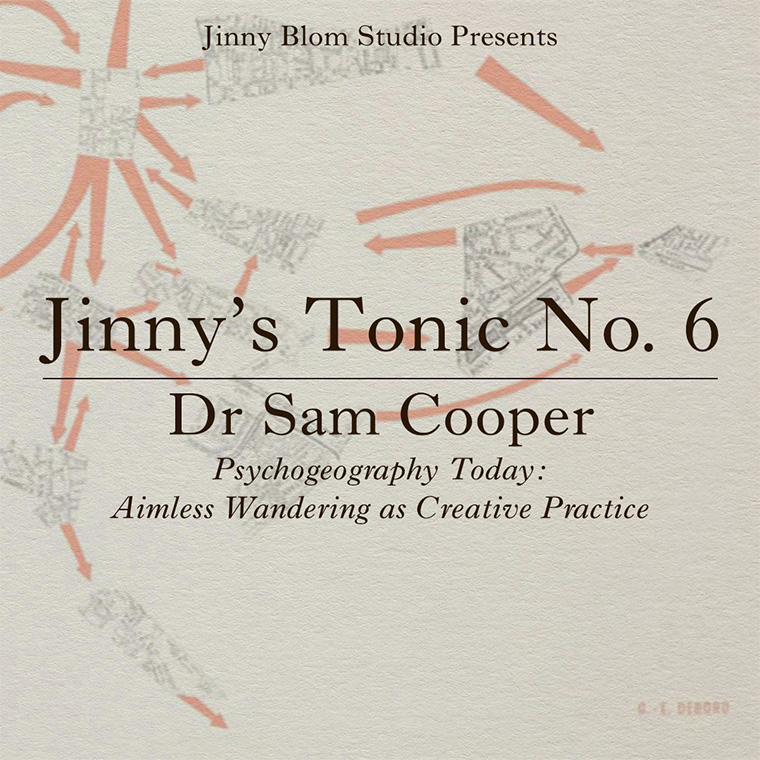 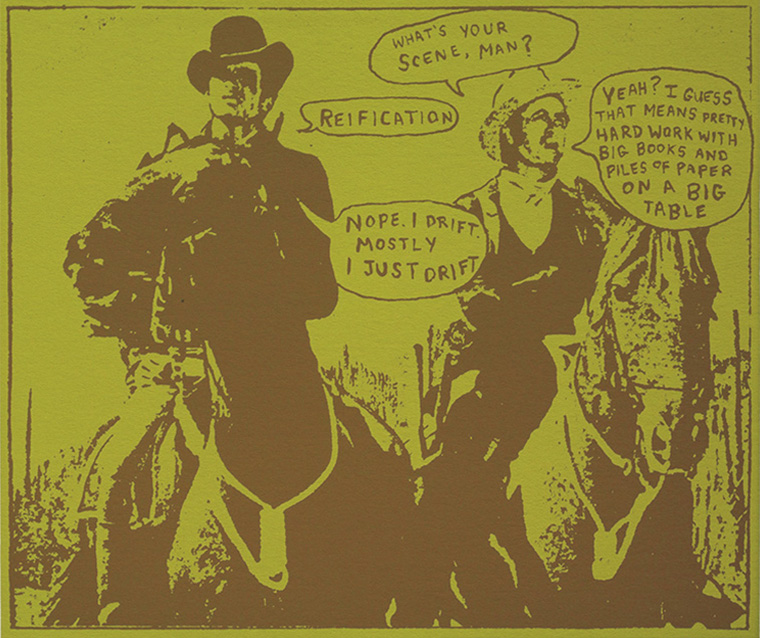 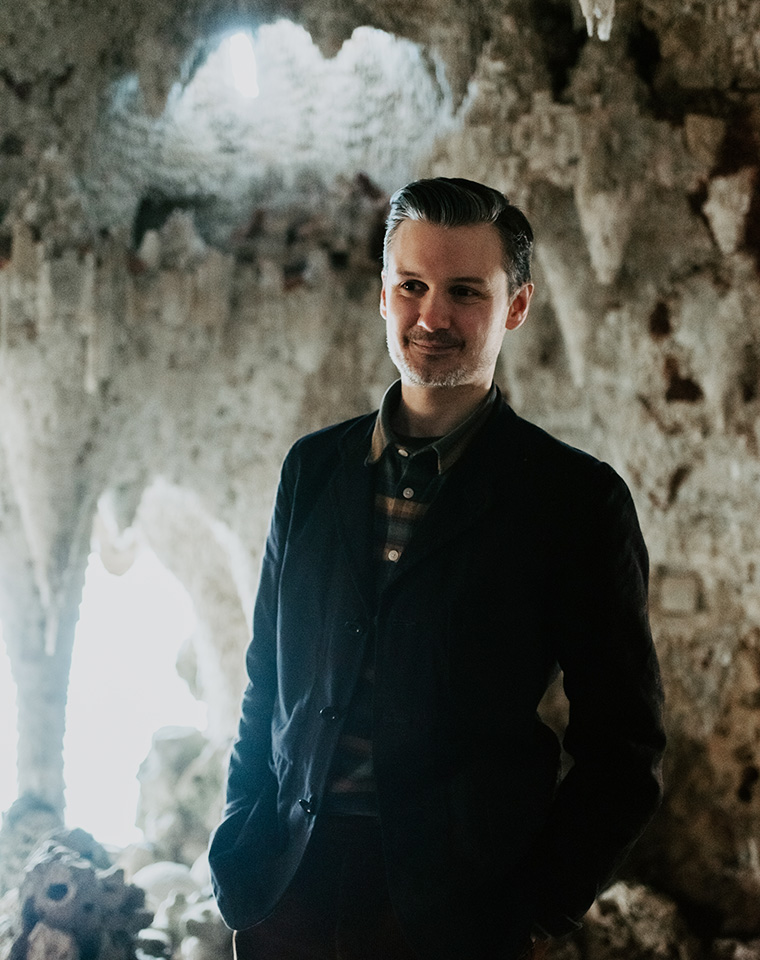 Dr Sam Cooper is the author of The Situationist International in Britain, a book about European radicalism and its impact on British culture.

The Situationist International was a group of artists and thinkers, active in the heady days of 1960s Paris. Through publications, exhibitions, artworks and public stunts, the Situationists shone a spotlight on what they called “the society of the spectacle.” As modern life had sunk into passive spectatorship, the Situationists wanted to create more exciting, more passionate ways of engaging with the world around us.

One Situationist activity was “psychogeography,” which they defined as “the study of the precise laws and specific effects of the geographical environment, consciously organised or not, on the emotions and behaviour of individuals.” In practice, this meant playful, sometimes anarchic, drifting through the urban environment, exploring the human experience of place.

Over the past fifty years, psychogeography has permeated British culture, from writing to filmmaking, urban planning to psychology, music to commerce.

Sam posed to the group that directionless wandering – whether literal, on foot, or more metaphorical journeying – can still create the liberating effects the Situationists desired.

Dr Cooper led our most theoretical Jinny’s Tonic yet: the guests mostly chose to refresh themselves with water rather than wine!

Before forming the group known as the Situationist International, several members of the group including Guy Debord were involved in the Lettrist movement, which was founded by the avant-garde polymath Isidore Isou.

The Lettrists are now known for their pranks. For example, on Easter Sunday, 1950, the Lettrists scandalised Paris by sneaking into Notre Dame cathedral to deliver a sermon on how “God is Dead”.

Situationism was also a development from Surrealism, which had previously sought to combine the dreamed world with reality. 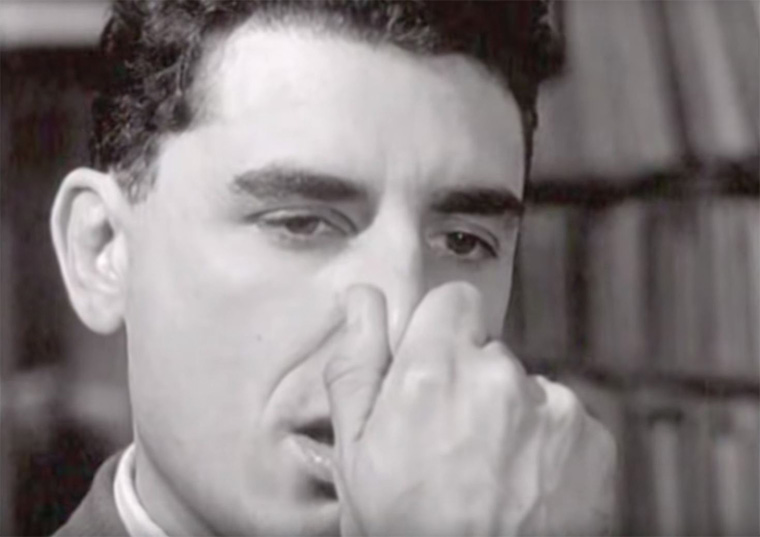 A still from “Around the World with Orson Welles”, 1955, where Isidore Isou and other poets perform Lettrist sound poetry for Mr Welles. Link to Video

While the Situationists were opposed to party politics, they were nonetheless very political. They took issue with what they saw as the “banalisation” of society. Advertising was seen as one corrupting influence.

Sam spoke about the Situationists’ principle idea, ‘the spectacle’, a term coined by the theorist Guy Debord. The idea was that the combined effect of modern communication is to distance us from lived experience: media over-saturation, the Situationists argued, makes us passive. 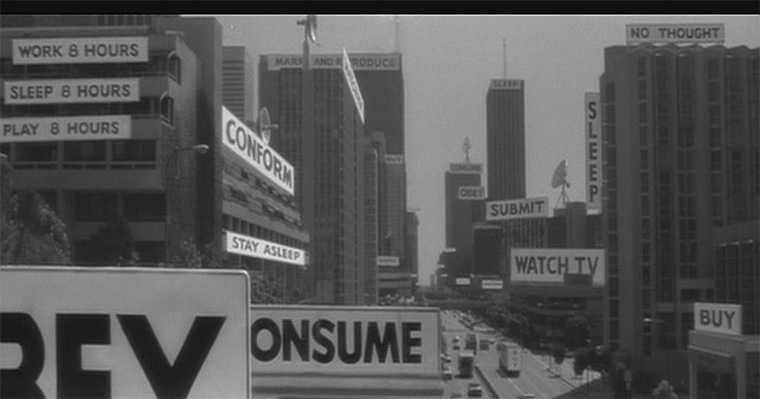 A still from John Carpenter’s ‘They Live’, his 1988 thrilling critique on consumerism.

The Situationists’ response was to puncture the norm. Through art, writing, poetry and performance they wanted to create opportunities to glimpse other possible ways to organise society. They described these interventions as “situations.”

The SI’s interventions were essentially optimistic: they believed that life could be reorganised, improved, and made more passionate.

“Our central idea is the construction of situations, that is to say, the concrete construction of momentary ambiences of life and their transformation into a superior passional quality”. Guy Debord, 1957. 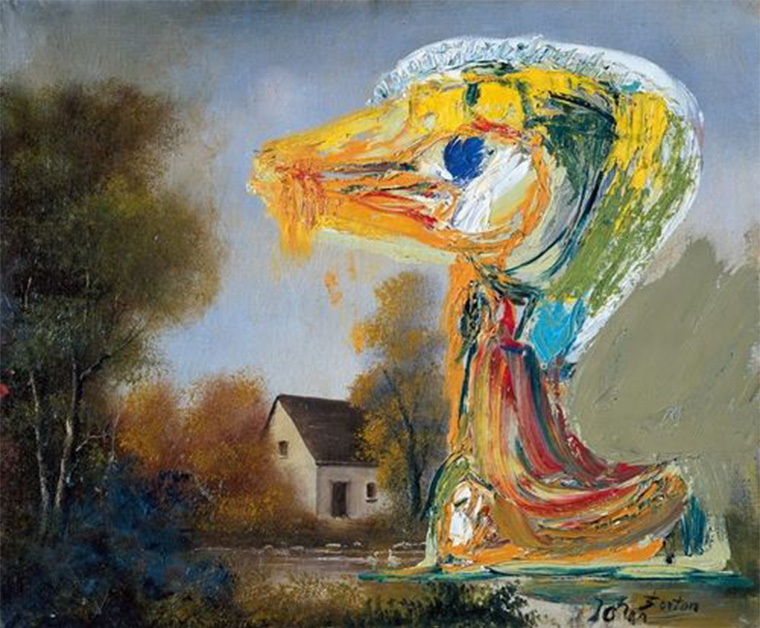 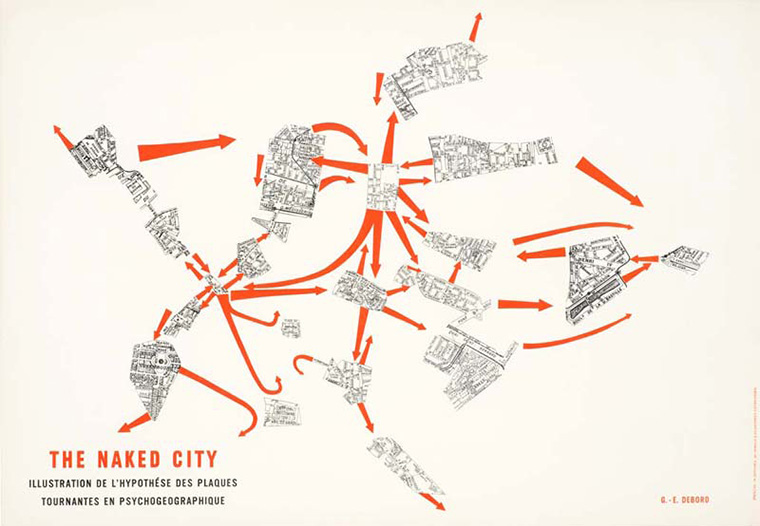 Guy Debord’s ‘The Naked City’, 1957. A psychogeographical map of Paris illustrating the notions of “centres” and “crossroads”.

A walk without a destination/the fluidity of cities

For the Situationists, psychogeography was a one way to “unlearn” the city. This was important because “the city” is the embodiment of “the spectacle”. Distractions were – and still are – everywhere.

We discussed mindless wandering as an unauthorised experience of a place, which can reveal one’s deep desires. Naturally the discussion turned to our shared experience of London. On the surface, London is a city that looks mostly accessible to wanderers, but there are subtle barriers being put up defining public and private land. 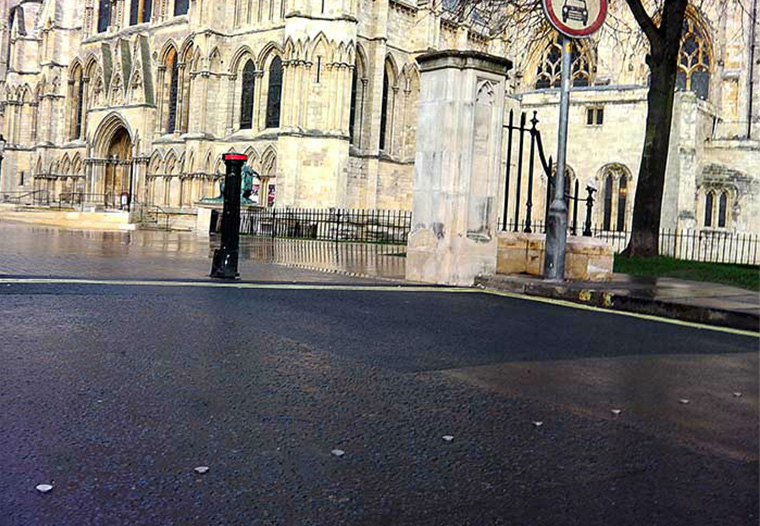 The Guardian Cities investigation mapped the spread of pseudo-public spaces across London in 2017 - areas in the capital such as parks and thoroughfares that may look public, but are actually owned by private developers and companies. 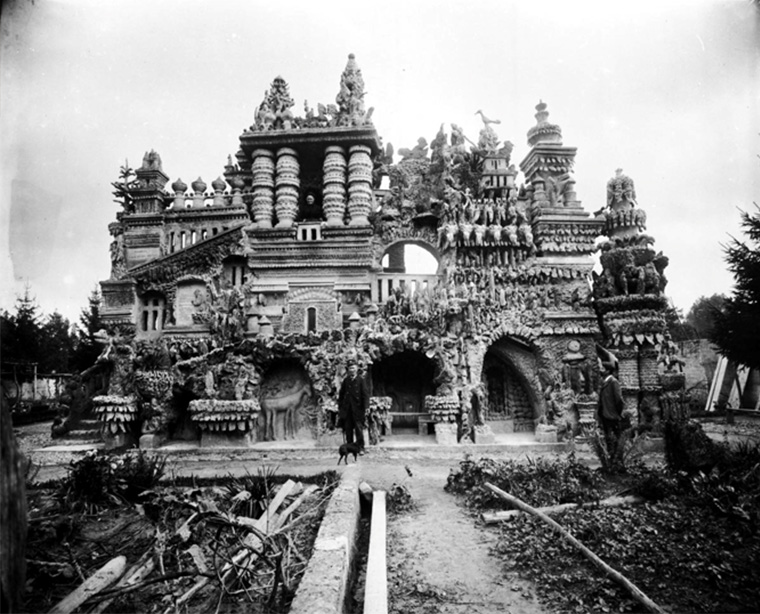 Dr Cooper told us about Postman Cheval, a French postman who slowly built a surrealist palace from soft limestone rocks collected on his rounds.

Beginning in 1879, Ferdinand Cheval spent 34 years gathering rocks in the rural town of Hauterives, France, to create his structure. The Palais Ideal became a pilgrimage site for radical modern artists such as Max Ernst and Picasso. The MoMA showed a photograph of the palace in their 1936 exhibition ‘Fantastic Art, Dada, Surrealism’.

The Situationists saw Cheval’s palace as “the first example of an architecture of disorientation,” which repurposed the forms of exotic monuments and vegetation.

The SI saw Cheval as an entirely free man, and the palace as an example of the combination of art and life, led solely by the individual’s vision.

“Our situations will be ephemeral, without a future. Passageways. Our only concern is real life; we care nothing about the permanence of art or of anything else.

Eternity is the grossest idea a person can conceive of in connection with their acts.”

We spoke of the resurgence of interest in psychogeography. It has become a form of artist production, of making something – music, film, poetry. The Situationist International struggled with this, hence their move into a dense, theoretical world, and ultimately the group dissolved in 1972. 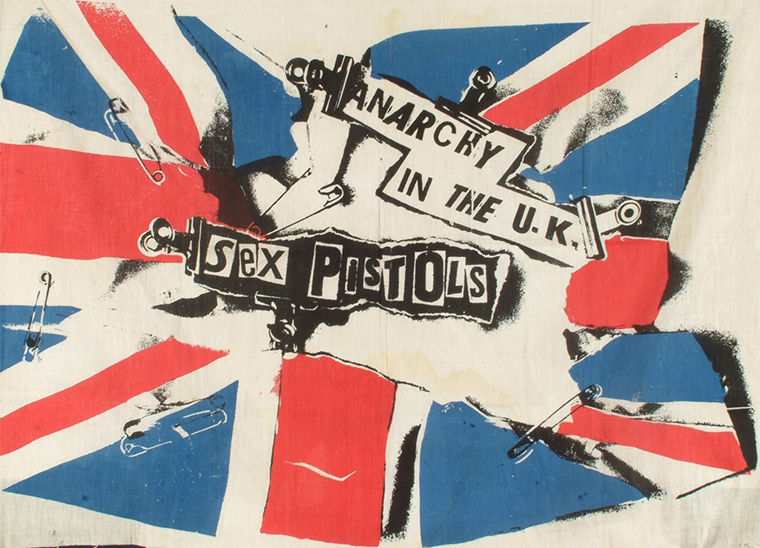 Our discussion led to the lasting effects the Situationists have had on culture and counter-culture. Perhaps the most famous influence was on the Sex Pistols, and the design language of 1970’s punk rock. Malcolm McLaren and Jamie Reid were active in radical Situationist actions carried out by King Mob, the English cultural mutation of the SI.

We wondered whether the Situationists would have approved of Banksy’s self-shredding artwork, ‘Girl with Balloon,’ renamed ‘Love is in the Bin’ after it was shredded at the moment of its auction in 2018. 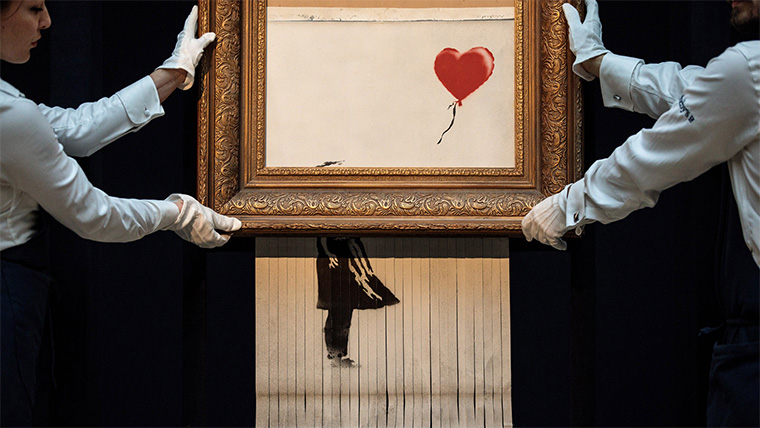 Banksy, ‘Love is in the Bin’, 2018. “The first artwork in history to have been created live during an auction” according to Sotheby’s. Was this a Situationist prank?

We spoke of Banksy’s unique place within culture and visual art, how his work is simultaneously high art and low art, and how he floods the market with “Banksy’s” to bring their value down.

Sam also told us of the Derive app, which describes itself as a “simple but engaging platform that allows users to explore their urban spaces in a care-free and casual way.” The idea of a psychogeographic phone app is perhaps a paradox: it encourages free play and chance encounter, but does so through a medium that is increasingly recognised to limit and commodify our everyday experiences.